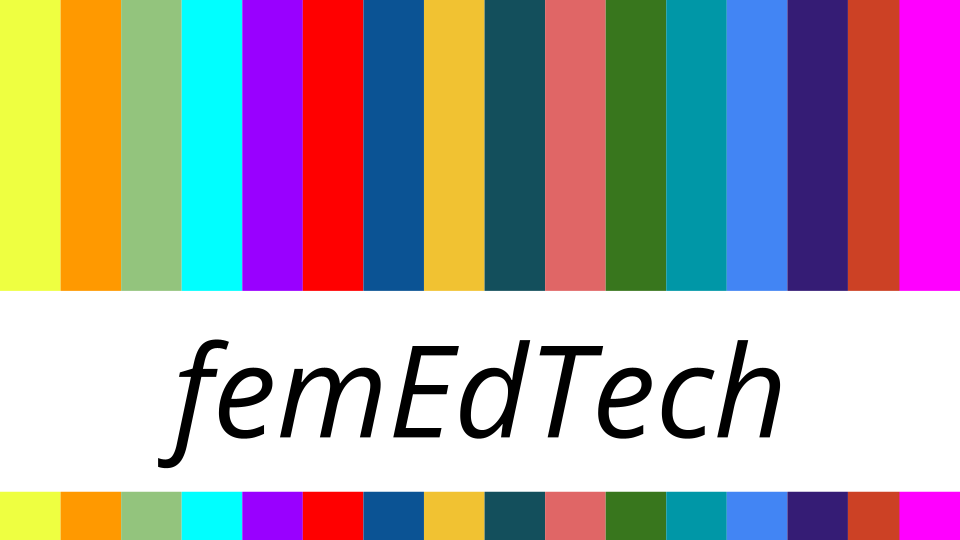 This post was originally posted on Open World in February 2020.

Despite the overwhelming gloom of Brexit, I got the year off to a positive start by curating the @femedtech twitter account for the first two weeks of January. I’ve been involved with femedtech in one way or another since its inception, and I often tweet using the hashtag, but this was the first time I’d actually taken a curation slot and it was a real honour to be the first curator of the New Year.  An obvious theme for my curation would have been New Years Resolutions, but to be honest, I’ve never been much of a fan of those.  I know they work for some people, but all too often they tend to become an additional source of guilt and pressure, which doesn’t strike me as a very good way to start a new year.

So instead I decided to focus on a theme of Inspiration. I had intended to tweet one source of inspiration every day, but I wasn’t quite able to do that. I did manage to tweet from the femedtech account several times every day, though this was a bit of a challenge once I was back at work.  It wasn’t hard to choose my first inspiration, Audrey Watters phenomenal roundup of 100 Worst Ed -Tech Debacles of the Decade.

Audrey has been described as the Cassandra of ed tech, and indeed she is, but she is also our Mnemosyne, our collective memory.  Audrey reminds us of all the failures that the ed tech industry would prefer us to forget, but if we don’t remember, how can we possibly learn from out mistakes and move forward?

Other inspirations I shared over the course of the fortnight were… Annual reflection posts shared by friends and colleagues,  ALT,  Wiki Loves Monuments Winners, Hong Kong Protest Artists,  and the #femedtechquilt project.

My final inspiration was a twitter thread about Archive Of Our Own, which provides a salutary contrast to Audrey’s 100 Ed Tech Debacles, and which I’m posting in its entirety below:

It’s an Open Source repository initiative, launched in 2009, which has over 2 million registered users, and over 5 million items. In had 281 million page views in the first week of January this year alone, and 1.12 billion in the month of December. It’s *huge*.  The repository is not for profit, has no foundation funding, no sponsorship, no advertising revenue. It supports anonymity and pseudonimity and it doesn’t collect or sell user data. It also has a hybrid tagging system maintained entirely by volunteers, which is a thing of wonder.  It’s based on inclusive feminist design principals and built and maintained almost entirely by women, many of whom are young, queer and nonbinary. Last year it won a prestigious international award in recognition of its achievements.  Some of you will already know what I’m talking about, others might be wondering why they’ve never heard of this astonishing initiative before.  It is of course Archive of our Own, the archive of fanfiction managed by the Organization for Transformative Works. It’s an incredible achievement that’s been almost completely ignored by the majority of the tech sector for the last decade. I’ll leave you to decide why. I started my curation with @audreywatters sobering “100 Worst Ed Tech Debacles of the Decade”, and I can’t help reflecting on what AO3s has achieved in the same period.  At a time when concerns are growing about identity, surveillance, data ownership, & ethics, AO3 shows us that there is another way to be, that another kind of internet is possible. If ed tech opened its eyes, it could learn a lot from AO3 *and* the women who built & maintain it.  To learn more about this incredible collaborative achievement I can highly recommend this 2018 Open Repositories Conference keynote by Casey Fiesler, @cfiesler,  And you can follow @ao3org and @OTWnews here.  I’ve also written a blog post AO3 – The mad woman in the open source attic?

That thread got quite a response when it was retweeted by AO3, and I was very grateful when Frances also drew attention to it at the start of her own curation, however I’m still not sure that many ed tech people sat up and took notice.

Although I use the #femedtech hashtag frequently I felt a much greater sense of responsibility when tweeting from the account. I was very careful about what I shared, reading every blog post, paper or news article from start to finish before tweeting it from the account. In the process I discovered several voices I would not have come across otherwise, including Marianne Thamm, whose powerful article In Defence of South African Hope, was brought to my attention by Laura Czerniewicz.

At the same time that I was curating @femedtech, I was also tweeting from my own personal account and curating the University of Edinburgh’s OER Service account, @openededinburgh.  All three accounts require different approaches and voices and I’d be lying if I didn’t admit that the boundaries sometimes got a little blurred on occasion. I didn’t consciously try to mute my own voice while curating @femedtech, but I was always very conscious of the accountability of my words.  So it was really interesting after the end of my curation when Maha opened a conversation about the diversity of curators voices on femedtech.

@bali_maha: When @LornaMCampbell was curating #femedtech she constantly sent relatively personal messages from the femedtech account. @2standandstare does that a bit, too. It’s cool 🥰
@lornamcampbell: That’s a really interesting observation Maha. I’m not sure I would consider many of the things I posted as being particularly “personal”, but I think that’s indicative of where we all draw our personal boundaries. It’s something I’m interested in thinking about wrt “openness”.

@francesbell It’s also relevant to something I am thinking about now, and I think that’s why I apologised. What does identity mean in the context of a shared curation account such as @femedtech ? or even #femedtech

@lornamcampbell: It’s interesting to reflect on. I added a comment to most of the articles I shared, which of course introduced my own perspective to the thread. But I think the value of shared curation is that we get these different perspectives & experiences from different curators. #femedtech

@bali_maha Agreed. I don’t think anyone should be apologetic for how their whole self influences their choices when representing some “thing” beyond themselves unless it’s really critical like if you are a diplomat. The diversity of curators ensures no one person dominates

@lornamcampbell Yes, this is exactly my thinking with relation to shared curation 🙂 #femedtech

All in all I found curating @femedtech to be a really positive and empowering experience and a great way to start the New Year.  I’m already wondering when I can sign up for my next slot!

This work by @Lornamcampbell is licensed under a Creative Commons CC-BY Attribution 4.0 International License.