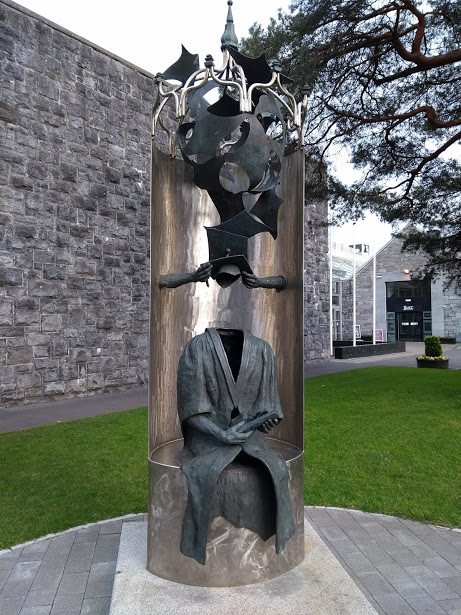 An imposter in the open space

OER19 was my fourth OER conference. They are now a fixture in my calendar, the only conference I participate in every year. I feel I belong in this community. But that wasn’t always the case. One of the themes this year, as we met in the beautiful NUI Galway campus on the western edge of Europe, was periphery and it resonated with me in a way I hadn’t expected. Here are my (very personal) reflections on feeling an imposter in this space.

My first OER was in Edinburgh when I was just new in post with the Open University in Scotland, still grappling with the concept of ‘open’ and feeling the absence of my recently retired manager and mentor who had seen a potential in me I hadn’t. I wasn’t sure I belonged there. I felt academically under qualified. An adult returner to higher education, I hadn’t at that stage even begun my master’s (in online and distance education), let alone a PHD.

By OER17 I was just about confident enough to submit a proposal and it was accepted. The session went well; there was an interesting discussion, some lovely tweets about my work engaging disadvantaged learners, and an offer of mentorship from an OU academic to publish on that work. I was part of Femedtech’s inaugural meeting. What a wonderful atmosphere for a not quite academic, not quite educator, not quite technologist to thrive in. And yet… one year on and I hadn’t published yet, hadn’t contributed anything to the Femedtech community, hadn’t submitted a proposal for OER18.

Days after OER17, my mother had received a terminal diagnosis. I made the decision to take extended leave to care for her and to make the most of what time we had. Everything that was not this was paused. It was the best thing I have ever done but also the hardest, and it took a toll. So many women have experienced the impact on their careers of taking breaks to care and I thought I knew what to expect but I wasn’t quite prepared for how much of my sense of self I lost to it.

At OER18, this became obvious. My feelings of outsiderness had resurfaced. I lurked and learned but I was a quiet presence in Bristol. By the end of the conference though, something had reignited in me. Momodou Sallah had told us that we were all open educational resources and it made me think. On the train home I started to write. Not brave enough yet to share in a blog, but I was writing about open education for the first time in a year.

I began to pay more attention to the Twitter chats involving many of the wonderful people I’d met at OER conferences. Mostly I “lurked” (a term that needs to be consigned to the edtech history books but which serves my purpose here) – connected, learning, my neurons firing with the exposure to ideas and debates, my bookmarks filling up with links to papers I will *definitely* cite someday. And then in July 2018, a milestone occurred. I contributed! Looking back it was a minor thing – a defence of the “digitally shy”, referencing Preece and Shneiderman’s (2009) Reader to Leader framework – but a huge step for me to involve myself in a conversation with Maha Bali, Leo Havemann, Catherine Cronin and Frances Bell. I’m sure all of those lovely people would find it surprising that they had such an intimidating effect on me, but I really was star struck and the fact that they responded to my comment meant more to my confidence than they could know.

The significance of that small tweet resurfaced at OER19, when I took part in a session led by Leo and colleagues Caroline Kuhn and Suzan Koseoglu. They had analysed participation in a Twitter HE chat and were interested in hearing our experiences of lurking (you can get a sense of these at #lurkerexp). I volunteered that imposter syndrome sometimes stops me from contributing to academic Twitter chats.  “Do I belong in this community? Do I have something of value to share?” During the session I realised that some of the tweets were familiar – we were looking at the very chat in which I had stopped lurking.

I have plenty to say about the legitimacy of lurking as participation but the session prompted this reflection on how it took me four OER conferences to feel that I am no longer an imposter in the open space. From the moment I bumped into Frances Bell and Lorna Campbell at the Galway bus station, I had a sense of belonging. The conference was like my twitter feed come to life, as I met, embraced, conversed with the wonderful people I follow in real life, and added so many more. I contributed twice at OER19: presenting on Recentering Open in the Community I felt I was offering a valuable non-HE perspective on ‘open’. I also took part in a panel on Enabling equity and inclusion for refugees and asylum seekers through open education. Previously I would have felt a huge imposter on something likes this but Gabi Witthaus didn’t think that when she invited me, so I chose not to think so either.

And it may seem like a small thing but I’m writing a blog post, on the Femedtech open space, because I think I have something to say. To the quiet presences ‘lurking’ on the periphery of the OER conference, you belong in this community.

This work by Gill Ryan @Gill_ie is licensed under a Creative Commons CC-BY Attribution 4.0 International License.